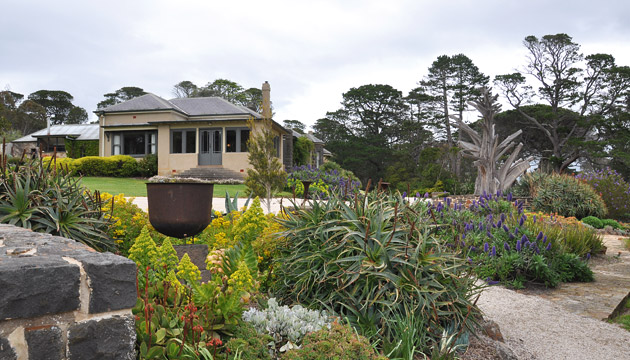 Posted at 01:39h in Eurambeen by Antonie 0 Comments
2 Likes
Share

Sarah Beaumont and Ian Glover are bringing a classic Merino-breeding property in Victoria’s Western District back to its former glory.

Story and photos by Genevieve Barlow

Many people aspire to quit the city for country living. Some downsize and go quietly. Sarah Beaumont and Ian Glover upsized and spread right out. Combining business panache, handyman how-to and a steely focus, the couple sold their inner Melbourne home four-and-a-half years ago and moved to Victoria’s Western District, intent on reversing the slide of a fading pastoral headquarters of renowned 20th century Merino sheep breeders and restoring its classic Edna Walling-designed garden. In November, at the peak of southern Australia’s gardens touring season, they thrust Eurambeen into the public eye again.

The bluestone and sandstone homestead, 55 kilometres north-west of Ballarat, was built between 1850 and 1862 by Francis Beggs to replace an original wooden settlers’ homestead on nearby Fiery Creek. Eurambeen became home to his family for 116 years until it sold in 1978 and eventually fell into ruin, a victim of the great investment scheme imbroglio of the 1990s, when vast tracts of good farming land across the Western District were bought and turned over to blue-gum plantations. The Eurambeen homestead and 60 hectares that included the Beggs’ 1845-built bluestone shearing shed was carved off and sold when a family bought the land around it to return it to grazing country. Like so many of Victoria’s Western District homesteads built on wool, it was big and old and expensive to maintain. It seemed destined for history’s rubbish bin. Then, in 2012, along came Sarah and Ian.

“We were at that point in our lives where we knew we just needed to change something,” says Sarah, 59, who runs an organisational change management consultancy and had previously been a psychotherapist and teacher. “I wanted another challenge and I wanted something big. ”

Sarah fell for the place the minute she trod the sassafras floors. Ian had arranged a real-estate inspection for her birthday in 2012. “In about the first five minutes I decided I loved it and my business brain was saying, ‘What can I do with this?’,” she says. “I reckon by the time I’d walked through the main entrance, even though it was in a most decrepit state, I was hooked.” While the couple negotiated to buy it, Sarah buried herself in the State Library to research the garden’s history. Today, the 1.21ha garden still features a sweeping gravel driveway, stonewall (or ha-ha) and poolside pergola – all classic Edna Walling features – plus Himalayan and Atlantic cedars overlooking a pinetum (plantation of pine trees).

Francis Begg’s son, Theodore Beggs, also a sheep breeder and Upper House MP, who represented the seat of Ripon in Victoria, commissioned Walling to design the garden in 1937. “She was an absolute rock-star garden designer of her times,” Sarah says. “She was a real trailblazer and incredibly successful at a time when women weren’t in garden design.”

Theodore had become sole owner of Eurambeen in 1913. In 1918, then aged 59, he married Agnes Walpole, many years his junior. They had four daughters before Theodore died in 1940, aged 81, leaving Eurambeen, then about 690ha, to be run as an estate and the homestead’s occupancy rights to Agnes.

Today, an in-house apartment, named in her honour and complete with its own living and cooking spaces, is rented to holiday-makers, weekenders and visiting business people mid-week. This was where Agnes, or Tom as her family knew her, lived until her death in 1977.

Eurambeen’s makeover has been significant. The wet and dry rot is largely gone, broken casement windows and rotten floors have been replaced and the roof’s slate tiles are in order. Hydronic heating is installed and fireplaces have been fixed. Garden walls have been pulled down and rebuilt and trees lopped and topped. A giant, ghostly cypress trunk remains as a sculptural tribute in the driveway.

Almost five years on, Ian, 58, who managed the construction of air-traffic control systems around the world for a living, is still finding history beneath the boards of the old place. A recent find included a receipt for Theodore Beggs’s new Buick car in 1917.

The makeover has thrilled descendants of the Beggs family, including Guy Goodman and his cousin Jeremy Smith. Two years ago Guy took his mother, Theodora (known as Paddy) Goodman (nee Beggs), now aged 90, to visit the home she grew up in. “We absolutely loved it,” Guy says. Meanwhile, Sarah has her sights set on bigger things for Eurambeen. It’s already on an international gardens-tour itinerary. “We’ll move into weddings and parties and we’re starting to work on the shearing shed to make it into a big events space, where we’ll hold anything from arts shows to food and wine festivals and music events.”